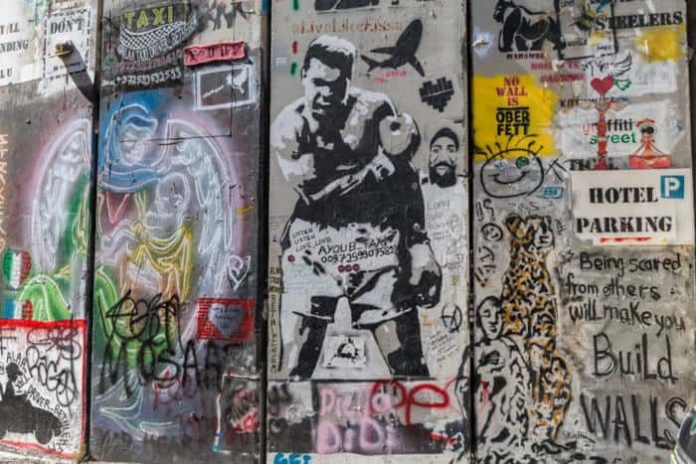 The identity of Banksy himself may remain unknown, but that certainly doesn’t detract from the status, publicity, and popularity of his art pieces. In fact, it is this very anonymity that commands an air of mystery around the street artist – making every headline, news story, and unveiled art piece a statement all on its own.

But street art isn’t all Banksy is known for. The artist is also a known film director, political activist, and author – with his art pieces holding the same elevated status in the world of movies and entertainment. Let’s take a closer look at which of Banksy’s pieces have appeared and featured in the movies.

Many art fans are surprised by just how influential Banksy is in the world of movies, having directed and produced movies like ‘Exit Through the Gift Shop’ which was released in 2010 and for which Banksy was nominated for an Academy Award. In the movie, a French immigrant and his obsession with street art are explored; documenting the main characters’ exploration of art with a focus on Banksy and another artist called Shepard Fairey. Eventually, the character becomes a street artist himself.

Another onscreen example that comes from the mind and direction of Banksy is The Outlaws, which was made for BBC One and Amazon Prime in 2021 and which featured the image of a stenciled rat sitting atop two spray paint cans. The comedy featured Christopher Walken as the character who paints over the Banksy piece as part of a community payback project – with news pieces from the time of release revealing that Banksy specifically created the art piece on set for it to be painted over by Walken.

Another example of Banksy and his influence making it onto the screens of millions came in 2010 when Banksy was invited by The Simpsons’ team to come up with a new title credits couch gag. Renowned as being one of the darkest ever opening concepts, Banksy drew on his usual knack of societal commentary to spotlight the promotion and development of the show as purely commercial and money-driven.

Despite The Simpsons gig not directly showcasing any of Banksy’s actual work, the entire episode in question included Banksy’s artistic tag and his name. For Banksy sellers, this mainstream depiction of the street artist did wonders for the prominence and notoriety of the artist’s name and place in the industry.

Another film that includes the works of Banksy is called ‘Manipulated by Fingers’ and follows two characters on a quest, detailing and exploring their experiences along the way. Two original Banksy’s are showcased in the film, one of which shows Jesus crucified with shopping bags while the other depicts the iconic Banksy rat. Banksy was credited for his graffiti artworks in the film, with small adjustments digitally made by the moviemakers to help create and tell their story – changing the words held up by the rat from “You lie” to “He lies”.

One of the most notable things to take from this exploration of Banksy’s pieces in the movies and on-screen is that in many cases Banksy works directly with movie and TV makers and creates specific and original pieces.

With Banksy popping up on both the big and the small screen, behind the camera as a director, and with his work in the forefront of various storylines, Banksy owners can never be too sure of where the next piece will come from or what the potential value is behind each art piece. If you’re holding onto or considering selling a Banksy, now is a great time to get a handle on the marketplace and receive a valuation.